Every once and a while we get lucky enough to stumble upon legendary wines. Recently we did just that by finding some of the rarest most sought after wines of the planet : 5 bottles of Burgundy. 2 bottles of 1976 Vosne Romanée les Brulées, 2 bottles of 1976 Richebourg and one 1978 Richebourg all from the producer with interstellar fame, Henri Jayer. His Richebourgs have been ranking the most expensive wines being sold on the market for the last couple of years now, catching prices even higher than the infamous Romanée Conti.

So what’s so special about them that any serious collector with very deep pockets thinks of these as the holy grail of wines? First of all, it’s rarity. Compared to Bordeaux first growths the Grand Cru plots in Burgundy are tiny. To give you an idea : Chateau Lafite Rothschild owns 112 hectare and produces about 16.000 cases of their first wine. The entire Richebourg appellation in the commune of Vosne Romanée is only 8 hectare (14 times smaller) of which DRC owns the largest part with 3.5 hectare, which is about ten times more than the tiny 0.35 ha Jayer had in use for his Richebourgs. The vinyards itself are and always were property of the Camuzet family and fully returned to Meo Camuzet in 1987 when the metayage agreement (sharecropping) with Henri Jayer ended. The total production never exceeded 2 or 3 barrels and in 1985, when part of the wine was already sold under Meo Camuzet’s label, it was just one single barrel. This is making odds of ever being able to get your hands on a bottle about as big as getting struck by lightning, obviously one being a lot more fun than the other. Ok, so it’s rare, but is it any good?

With the vines having been replanted in the late 50ies, it took Henri Jayer a couple of years, decades even, adjusting his process to finally being happy enough with the quality in the 1970ies. This is why only in 1976 he started bottling most of his wines on his own estate instead of selling them off in cask to négociants such as Lichine and Dessilly. 1978 was the very first vintage with the entire production being estate bottled so that should give an idea of how this modest winemaker thought of his result even back then. Sadly, not being one of the lucky few ever having had the opportunity of tasting one of Jayer’s wines I’ll have to rely on other people’s opinions for this.  But amateurs and critics alike seem to be unanimous on this :Henri Jayer who was born and bred in Vosne Romanée produced wines in his own characteristic style, managing to find the perfect balance between ripe fruitiness and lots of wood (even now Meo Camuzet uses 100% new French oak for his Richebourg), full and rich but never heavy. The Richebourgs tend to have a slightly more edgy character due to having more minerality but always a combination of precision and purity with flair and nonchalance. If it were a car I would compare it to a Bugatti, not a recent Veyron which is all about thrills but a true classic, a 1930ies Royale, extremely rare and a unique combination of performance with pedigree and luxury.

With all this being said, there still is the small matter of provenance. Sadly, when there are large amounts of money involved, fraud is never far away and I’m sure a huge amount of wines like these available on the market nowadays are fakes. With wines as expensive as crown jewels it’s imperative to know what you buy so you can be sure you get what you pay for. In this case, I personally bought the wines from a Belgian doctor who was the first and only owner. He frequently visited a Michelin star restaurant and after having learned from the owner that Henri Jayers wines were the best you could possibly get, he immediately contacted his wine supplier. Monard,a wine merchant that was very influential in creating the reputation of top French wines in Belgium, was able to sell him 6 bottles of Richebourg (3 of each vintage) and 24 of the Brulées (12 of each) back then in the early 80ies. The wines have since then never been moved, kept in his cellar until I recently went by to inspect them. He still has a nice collection of wines, mostly top Burgundies, but those 5 bottles was all that remained of his Jayers. If you take into account the quality, rarity and fact they’ve been stored in a perfect cold, damp and dark cellar, these bottles are about as good as they get and I’msure they will be the star in some lucky wine lover’s collection. 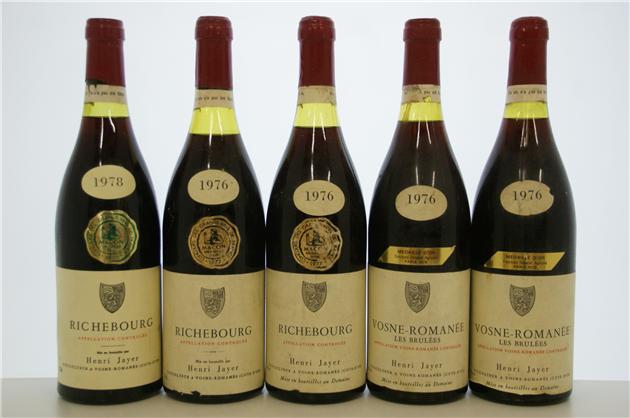