Never judge a wine by its color - 1966 CORTON CHARLEMAGNE

If I’d have to give this tasting note a working title, it would definitely have to be ‘Never judge a wine by its color’.

We bought some older wines from a private collector recently, among which was this old white Burgundy. It had a good level, tight fitting capsule with no corrosion or signs of seepage and a label that was perfect for its age. So what was wrong with it? The bottle itself was made from clear glass which is quite rare and this makes it easier to judge the color of its content. Sadly enough,saying it didn’t look good was like stating the weather wasn’t good during a downpour : this had the brooding brown color of a deceased wine. In the glass it looked only slightly better : light brown with an orange rim, which would be excellent for an old Sauternes, but a bit terrifying for an old dry white, so the prospect of tasting this was grim to say the least.

And then came the first surprise : even still quite cold from the fridge the aromas were abundant and very pleasing. There was a nice combination of fruitiness (dried apricots, orange rind), almonds and cedar, some floral notes later on as well (acacia, camomile) with something synthetic (molten plastic) and a whiff of stronger alcohol (Mandarine Napoleon and Stroh).

After the great surprise of the nice smell, hopes were definitely raised and luckily the taste didn’t underachieve either : this was full bodied and buttery textured, very supple and long lasting with a great dry finish. Very good indeed, it just lacked a touch of crisp acidity to give it more vivacity, but besides that, this clearly was a wine with a great pedigree to still be this good after half a century.

So once again the proof was in the pudding and astonishingly the outcome was that a wine you’d chuck down the drain upon the mere sight of it turned out to be a great old white!

Discover other years Corton Charlemagne in our selection
« Previous Next » 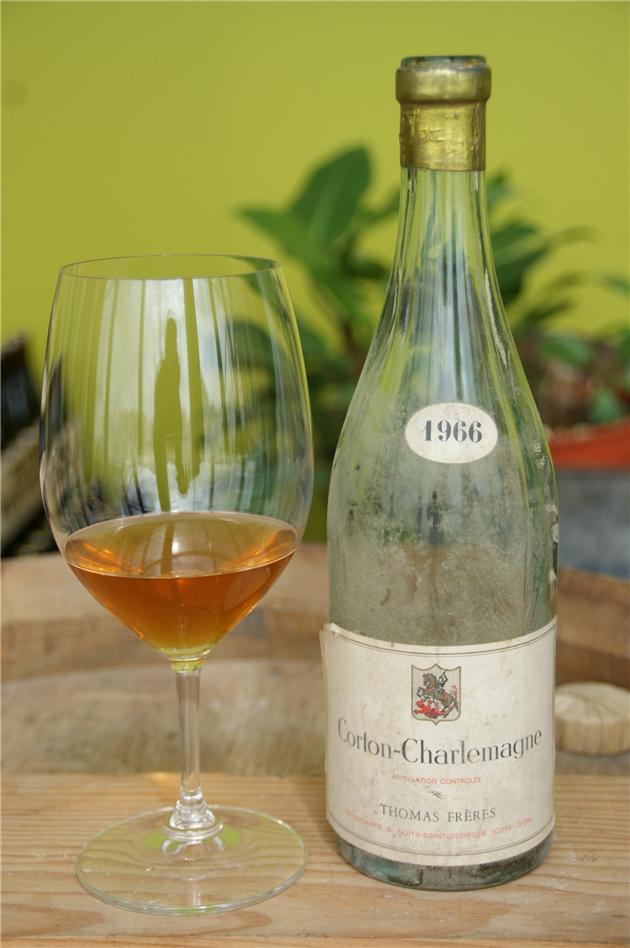