This wine was bought in a small parcel of 4 bottles in total, 2 of which were unfortunately too low to be drinkable, one which is virtually perfect and then this one which had a lower but acceptable level for its age (min 6.5cm) but unfortunately with only remainders of the label. So, lucky us, we had to open it up to be sure what the content was exactly. A completely saturated cork that nearly pulverized at the slightest touch made opening quite a challenge. I had a whiff of the biggest part of the cork that we anaged to pull out and that was slightly off putting to say the least. Our CEO Chris, usually the bravest when it comes to testing very old wines, kept on pushing his nose deep into the glass so I figured it couldn’t be all that bad. And what a total surprise this was : a roller coaster of smells and tastes, very stale and animalistic, boarish at first, but very quickly, after just a minute in the glass the more negative odors gave way to pure finesse. A lovely mixture of autumn aromas from delicate forest violets to game birds, chanterelles and truffle, some sweetness as well and a woody, cedary note which lent it a freshness you wouldn’t expect to find in a bottle of wine of nearly 100 years old. The color was maroon with only the very first glass clear and somewhat transparent and the further we emptied the bottle, the more cloudy and murky it became, once again, not too inviting.

First taste was pure acidity, completely dominating, but here again, after giving it a couple of whirls to expose it to oxygen, the wine became more and more knit together. After a couple of minutes to me this was just one of the nicest old wines I ever tried, acidity was still present but not overpowering anymore, lots of alcohol which leant the wine warmth, fullness and weight. This was a great example of a wine that has totally lost its fruitiness but was packed with secondary and tertiary tastes to make more than up for that, too bad there can’t be a lot left like this out there.

Discover other years CLOS VOUGEOT in our selection
« Previous Next » 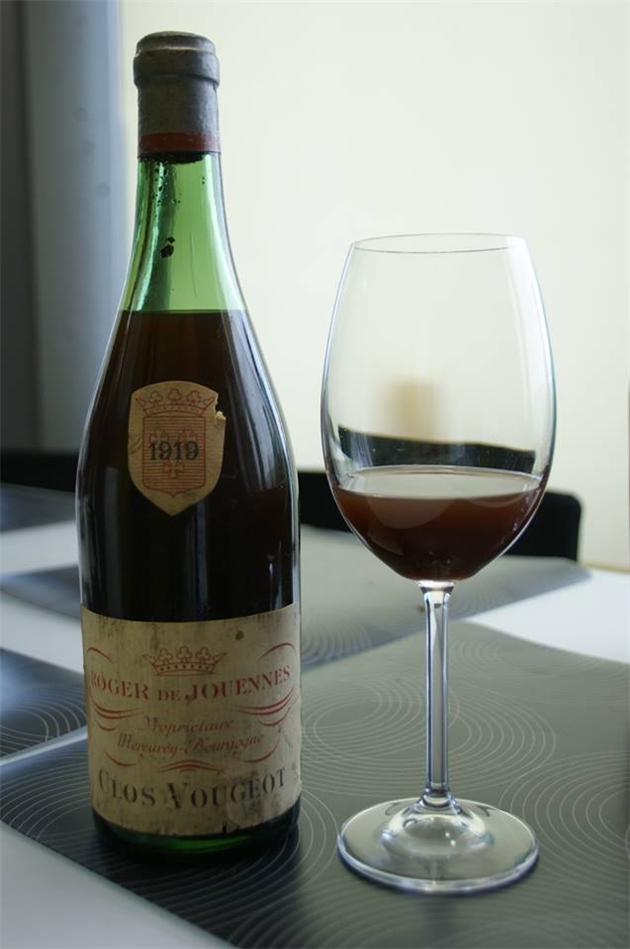